How an Advance Directive is a Gift of Knowing: Mary’s Story 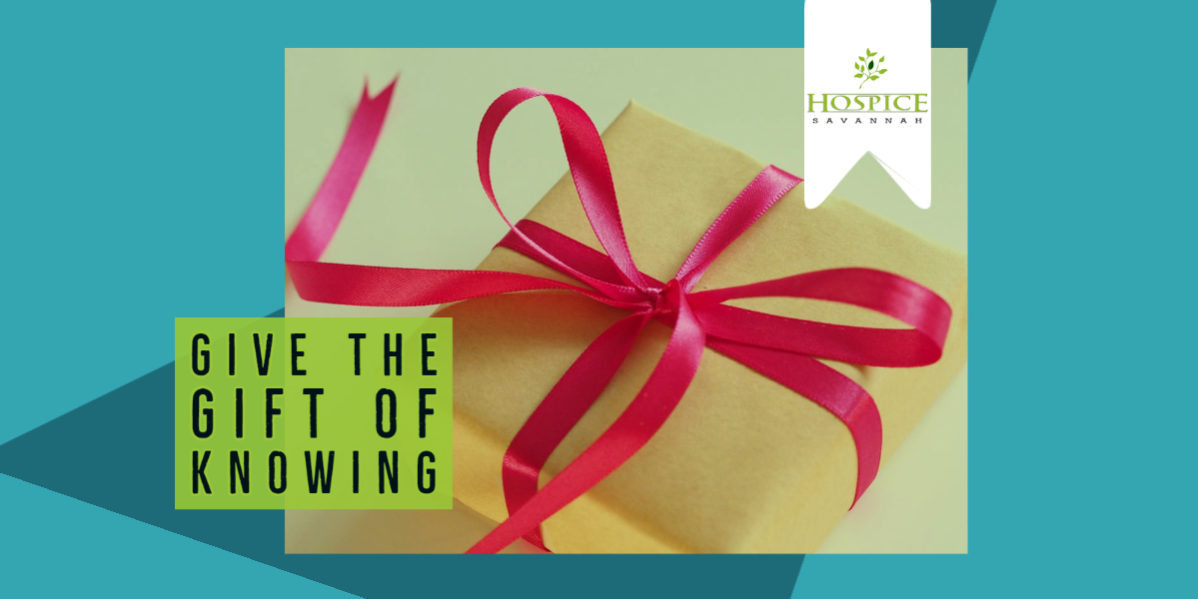 Mary’s Story & Why You Should Complete Your Advance Directive Today

The following is adapted from a talk given by Hospice Savannah’s President & CEO Dr. Kathleen Benton at a senior living community called The Marshes of Skidaway in Savannah. This article will illustrate how an advance directive is a gift of knowing.

A Healthcare Advocate Is Made

My personal and career experience has taught me lessons that I want to share with you today about the quality of life. For this article, an advance directive is defined in the same way as a living will. My younger brother Daniel, who was born when I was five, grew up with Proteus Syndrome – the same disease shared with the Elephant Nan. This extremely rare genetic condition causes tissues of the body, such as skin and bone, to overgrow and Daniel had 110 surgeries and thousands of hospitalizations all over the United States during his short life. My family and our community attempted every avenue we could to provide the love and care that he needed and I was naturally affected by these experiences. I grew into the role of an advocate, fighting for the treatment and services he needed. My upbringing later shaped my career choice to become a Medical Ethicist and champion of Palliative Care.

My observation after 13 years as a Medical Ethicist is that health care has become more and more complex and disjointed as technologies and specialties have increased. Health care can be very daunting to navigate even when you are well, it only becomes more so when a crisis arises.

I cannot emphasize enough that the best thing you can do to have your end-of-life wishes honored is to be your own advocate by designating somebody to be your health care advocate, should you not be able to speak for yourself. The next best thing is to have conversations with your loved ones and document your wishes in an advance directive. Since no one signs up to have a medical crisis, being proactive is key.

I want to tell you a little bit about my career as a Medical Ethicist with the St. Joseph’s/Candler Health System because it encompasses all the key points of why I advocate for completing an advance directive as part of advance care planning.  When I walked into my very first patient’s room and said: “Hi, my name is Kathleen and I’m an Ethicist for the hospital,” the patient’s father put his hands on the door to block me and said, “We do not need an Exorcist!” Just for the record, a medical ethicist is a healthcare professional who specializes in helping patients, families, and medical teams solve medical ethics dilemmas.

How Mary Was Affected By Not Having an Advance Directive

Mary’s story is very important because it starts out so predictably and so similar to many people’s experiences: Mary was 78 years old. She was living independently. She’d cook meals for the family every Sunday. She had three daughters. One was a registered nurse, one lived in California and the other was a mother of four and lived in Savannah. They were all very close to her, they were all excellent children. They all seemingly got along, as daughters do, most of the time. The ones who lived nearby would go have dinner with her. The one who lived in California would see her as much as she could. Mary was always verbally clear with her girls. She would say: “Now I’ve had a great life, but if something happens to me if I’m dependent upon tubes, don’t you dare, don’t you dare, let me linger like that! I want to die at home!”  Mary, however, had not documented her wishes in an advance directive.

Q: So my first question to you is where do you think that most people want to die, kind of like Mary?

Q: So my second question to you is what percentage of people die at home in America?

She seemed to have a very normal life and didn’t go to the doctor all the time. But in her 78th year, Mary got a diagnosis of Stage III breast cancer. The oncologist said it’s very treatable- no surgery, but what was needed was some eight weeks of extensive aggressive Chemotherapy. So the girls gathered around. They did not usually go to the pulmonology or cardiology appointments with her, but when it comes to oncology – I don’t know why it’s always like this – they hear the word “cancer” and the family comes together. So the girls were going to the oncologist with her and staying with her during treatment.

Mary progressed to about her third treatment, got an infection that got progressively worse so she was hospitalized.  Now the California daughter, who had returned home, flew back to Georgia, and all three girls rallied around their mother.

Which Physician Is In Charge?

What exacerbated Mary’s infection was her previous pre-existing progressive illnesses. She had congestive heart failure and COPD. Her condition came to a head in the hospital: she was experiencing shortness of breath and had a serious infection they could not seem to control. The worst part off of all of it was she had four physicians, but:

Q: Which one of them was overseeing her care in the hospital? Who was Mary’s physician gatekeeper?

Hospitalists are doctors with whom you will not have had a prior relationship because they do not have a practice outside the hospital. They are the doctors who oversee your care during your stay in the hospital, and they rotate patients every ten days. Hospitalists are the “captain of the ship.” Mary’s pulmonologist was consulting the hospitalist and then having a quick discussion with the daughters about what should happen if, and when, her breathing continued to decline. In other words, “Do you want us to put her on life support? “

Then Mary started getting arrhythmias so a cardiologist was called in. And as things progressed, the staff asked the RN daughter, “Does your mom have a living will?”  The girls were confused. The daughters were still mistakenly thinking that the focus should be on mom getting better for her next round of chemotherapy.

The story I hear over and over again is, “I don’t understand.  She was doing so well. She was playing bridge. She was making dinner for us every Sunday.” And all that is true, but the piece that the girls were ignoring was that Mary had a progressive illness before she ended being diagnosed with cancer. She had congestive heart failure and COPD. Mary’s main problems and the family at that point were: She did not have a medical gatekeeper for information, she had not designed one of her daughters as her medical advocate and she did not have her end-of-life wishes documented in an advance directive.

The advance directive would have been a guidebook to her family outlining her wishes.

Q: If there is no advance directive/living will, who will make decisions? Is it a lawyer? Is it the court?

A: The reality is when no one person is designated as the advocate, decisions fall to all three daughters jointly. That is a problem I saw 50% of the time, if not more so. One sibling wants everything medically possible done, another sibling wants more minimally invasive treatment and a disagreement ensues. And so it was in Mary’s case. The California daughter wanted everything medically done. (Anecdotally, it is the child who’s living out of state who wants to rescue the situation because he or she hasn’t seen mom go through the last ten days of intervention.)  So the daughter flew in and said, “Do everything!” and the other two daughters didn’t want to fight her, so they said, “Okay we’ll just agree with you, for now, let’s just focus on the positive”. And they resolved not to talk about it. But as it turned out, a crisis arose overnight.

A Decision Was Needed

Mary’s situation deteriorated and a decision needed to be made about whether or not she should be intubated to stabilize her breathing. The daughters were in disagreement about what to do, had not wanted to talk about it; it was too much for them to process, and her mom was not able to make decisions for herself. It is at this point that an advance directive could have guided the daughters’ decision-making process, helping them emotionally during this stressful situation.

By default, unless otherwise informed by a doctor’s order, the hospital will provide all life-prolonging measures possible. Mary was intubated and she was put in the ICU. You’re in a whole different world when that happens and it was likely Mary wasn’t going to get what she wanted, a chance to die at home.

I’m just telling you the reality of today’s healthcare world.

So days went on and they kept her intubated. The daughter’s focus was still on getting her well enough for the chemo. The RN daughter said “This is wrong. This isn’t what mom wanted. “And the other daughters were on the other side. The California daughter said, “I’m not having anything to do with this.” After 10 days of intubation, things go downhill.  Mary passed away in the hospital dependent on tubes.

It was just unnecessary.

Here’s what should’ve happened and mistakes for you to avoid:

What is a Palliative Care Doctor?

What a lot of people think about palliative care is that it is a hospice doctor. That’s not true. There is a specialty for non-hospice palliative care, meaning medical palliative care that follows the progression path of your disease, no matter your age.

What makes these physicians unique is that they are the gatekeepers for all the information that your specialist gives you so they sort through it all. They can work with you, your loved ones and your doctor to create a plan of care that offers relief from physical, emotional and spiritual pain, symptoms and stress. They explain your choices and ensure your needs and wishes are honored.

They spent their entire Fellowship learning how to speak to you and prescribe medication that addresses the symptoms surrounding the progressive illness. They are gifted in the art of conversation. And your Palliative Care doctor will also be your gatekeeper in the hospital.

Your Advanced Directive is a Gift of Knowing: Complete Yours Today

When my brother Daniel died in 2017, he died with a Palliative Care doctor honoring his every wish. We all want a peaceful death based on our own wishes so that we don’t end up like Mary. Completing your living will/advance directive clarifies your wishes and helps your family and loved ones to honor your choices. An advance directive is a gift of knowing. Complete yours today!

Every state refers to terms and document names differently.  For more information about advance directives or palliative care, please visit this page of our site.

Click the image for more information about Dr. Benton’s book