Ophelia Rodriguez, annual giving specialist for the Hospice Savannah Foundation, and resident of Pooler, volunteers her time to serve as the co-chair of the hospice’s “We Honor Veterans” program. Ophelia, who served dual military in the Active US Army and the US Air Force Reserves, explains,“ ‘We Honor Veterans’ is a national program through the National Hospice and Palliative Care Organization. Hospice Savannah is one of very few hospices to have attained a Level Four status. This means that not only do we offer on-going education on Veterans’ unique end-of-life issues for our staff and volunteers, provide a Veteran-to-Veterans volunteer program, and have procedures to help Veterans and families to access benefits,  but we also cultivate ongoing relationships with Veterans Service Organizations  and local and regional Hospice-Veteran partnerships.”

One in four deaths in the US are Veterans and sometimes they may need skilled interventions – for example, combat Veterans may suffer from PTSD and have mental, emotional, social or moral injuries; they may not only have witnessed trauma,  but caused it. Perhaps the most touching part of the program is how Hospice Savannah honors and thanks each patient who has served our country by presenting them with a certificate of appreciation and a special pin. Ophelia says, “We are usually joined in these visits by an officer from the patient’s branch of the armed services. For some Veterans – especially those from the Vietnam era – this may be the very first time their service has been recognized. 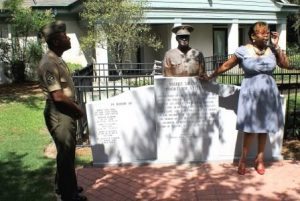 “I recently had the honor of attending a pinning of the last Pearl Harbor US Navy Seabee in the Coastal Empire. It was very moving – his whole family came and he was so proud to display his medals and wartime photographs.  We were joined by US Navy Captain Todd Lacy, commanding officer of Savannah State’s NROTC.

“Another great story occurred about three years ago after we had sent one of our WWII Veterans to Washington DC on an Honor Flight. It was discovered that Mrs. Amelia R. Jones, a Sergeant in the Women’s Army Auxiliary Corps (WAAC), was eligible to receive the red jacket of the Tuskegee Airmen and subsequently there was a special ceremony at the National Museum of the Mighty Eighth Air Force. Shortly after that, we had the honor of hosting Senator Johnny Isakson and Brigadier General James R. Blackburn, Jr., Deputy Commanding General, 3D ID at our Hospice Inpatient Unit (HIPU) as they presented Mrs. (SGT) Jones with the Congressional Gold Medal.”

The program was initially funded by Mr. Jim Strickland, a former resident of Bloomingdale, in gratitude for the care provided to his father, retired Marine MGySgt Roy Strickland. At Hospice Savannah, we aim to honor and thank our veterans every day. Happy Fourth of July!