As Fathers Day approaches, our thoughts turn to our dads – whether they be alive or dead, and whether they evoke happy memories or troubling ones. 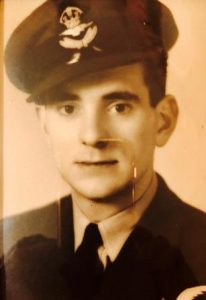 “My father, Henry O’Hara Logan, was a very tall, rather intimidating man who was the headmaster of the local elementary school in our hometown on the north coast of Ireland. He loved to fly fish for salmon on the River Bush, to drink with his buddies after a round of golf at Royal Portrush, and to train with the Territorial Army (like the National Guard here) each summer in Germany.

He retired as a Colonel, an Aide de Camp to Queen Elizabeth II, and as a Commander of the British Empire (CBE).  Creatively, he painted watercolors in his younger years, could draw anything you asked him to, read and directed numerous plays and pantomimes for the local drama group and did the makeup for the main characters. He was truly a Renaissance man.

Daddy died very shortly after his retirement, a decade or more after I had emigrated to the U.S.  How I wish I had more time to get to know him as an adult, to ask him about his childhood in our quaint seaside resort, to know how he first met my mother, and to find our more about his years as a navigator for the RAF during WWII. He never spoke of it. I only knew he flew the “Burma Hump.” As our founding Hospice Savannah story keeper, Dottie Kluttz, has taught us, it is important to gather family stories and to leave a verbal or written legacy for the next generation. Our story keeper and memory keeper volunteers work with our patients to do just that.

This Fathers Day, spend some time with your dad if you have still have him and ask him about his childhood and life as a young adult. If he is no longer in your life, retell the stories and memories you have of him. And, as always, if you struggle with his death and need bereavement support, our Full Circle counselors are here to help.”