As a participant in our We Honor Veterans initiative, Mrs. Jones learned of her qualification as a Tuskegee Airman during her Honor Flight Savannah visit to Washington, D.C. in September, 2014 and  was inducted into their ranks the next month during a red jacket ceremony at the National Museum of the Mighty Eighth Air Force. 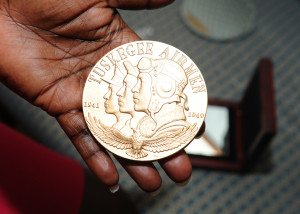 This past weekend Sgt. Jones was awarded the Tuskegee Airman Congressional Gold Medal by 3ID Deputy Commanding General, BG James R. Blackburn, Jr. and Senator Johnny Isakson at our Hospice Inpatient Unit (HIPU). The medal features three Tuskegee Airmen in profile – an officer, a mechanic and a pilot. The eagle symbolizes flight, nobility and the highest ideals of the nation. 1941-1949 indicate the years that these Airmen were assigned to segregated units. The reverse side depicts the three types of airplanes flown – the P-40, P-51 and B-25.

What a wonderful honor and historically significant ceremony! We are so proud to have played a role in thanking Mrs. Jones for her service to our country.